The organisation is Real Ice (www.realice.org.uk), a diverse team of social entrepreneurs formed from the SIKU volunteer project. Real Ice aims to build a business that will take technology, developed with the assistance of Bangor University, to build a re-icing machine. In summary, we intend to replenish the Arctic ice using our carefully designed and concept-tested wind powered machines that are maintained and operated by the indigenous people of these Arctic regions.

The machine has been designed with two leading functions;

The primary function is to increase ice thickness and thereby reduce the impact of global warming and ice melt in Arctic regions during the winter. Research shows that ice cover increases the reflection of solar radiation back into space, which aids in the retention of ice through each summer and lessens sub-surface warming, named the Albedo effect (See image below). 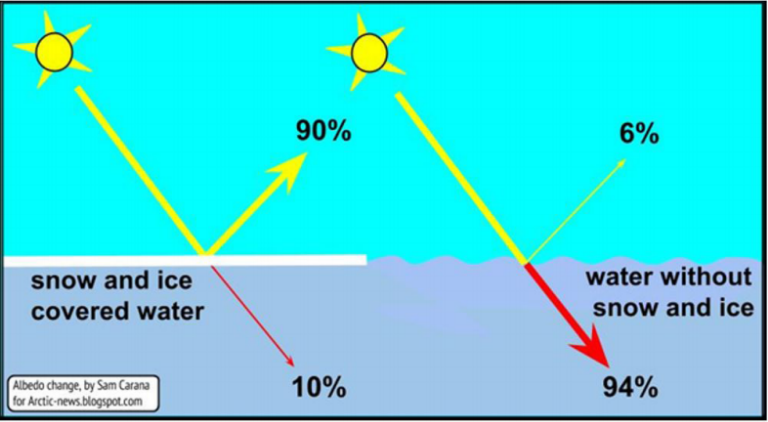 The second benefit of ice machines would be to aid the development of arctic communities by helping to combat the adverse effects of global warming and ice loss on traditional local communities through the shaping of an additional agricultural economy.

We seek to aid the defence of the right of indigenous people to live and thrive as an Arctic community by providing an alternate income source. The ice made by operating the Real Ice machines is marketable through the sale of carbon credits to companies that wish to off-set unavoidable energy usage, by direct action on climate change in the Arctic where global warming is occurring at a faster rate than elsewhere on Earth.

There are cities out there spending 500 million dollars on flood defences (https://www.reuters.com/article/us-miami-sealevelrise-idUSKBN1A601L). If each affected city spent a small amount on fixing the cause rather than building defences, solutions would easily have enough money to start making a difference. Climate change is affecting humans, because it is affecting weather patterns and sea levels, and therefore many cities around the world and valuable land will potentially disappear under the sea if nothing is done.

The physical re-icing technique proposed here is already in use today, to create layers of ice during the winter months in order to enhance the Arctic environment (https://www.boem.gov/sites/default/files/boem-newsroom/Library/Publications/2005/c_core468.pdf, https://lakareacts.com/winners/ice-farming/) or to create economic opportunities during the winter seasons (https://ncc-ccn.gc.ca/places/rideau-canal-skateway, https://modernfarmer.com/2016/03/ice-farming-ouray-ice-park/). The difference we are proposing here is to use renewable energy to run pumps for several days at a time. The pumps are intended to be deployed by individuals and communities living in the Arctic in return for payment from companies wishing to offset their emissions charges against a business return.

Helping to reduce climate change, CO2 negation using albedo improvement techniques is a new approach to offsetting the impact of emissions into the atmosphere. Calculations show that 1 tonne of CO2 is negated by 11.5m x 11.5m of sea ice (D. Cook, T Mountney, T. Owen and V Clavel. “Arctic ice thickening to preserve polar ice caps”, Bangor Uni. 2018). On that basis every 100m x 100m of ice produced by our machines could potentially offset 75 tonnes of CO2. Our machines are designed to lay down 3 extra years’ worth of reflective surface in a week and then moved to another site.

Real Ice will work with organisations, companies or private customers all over to world who want to offset their carbon emissions. Organisations, companies or private customers may also opt to back/pay the local owners of the Real Ice machines to create products other than carbon credits, such as habitats for wildlife (e.g. conservation NGOs paying for amount of ice habitat created).

The Real Ice proposition is offering the following key benefits;

These benefits have been tested with organisations outside Real Ice and have been found to be of interest to the companies concerned. In order to prove the concept, it is estimated that a three-month period of operation will be sufficient to demonstrate the benefit regarding the re-build of the ice sheet. Each machine is estimated to lay down 3 years’ worth of reflective surface in 1 week before being moved to another site and three months’ operation will prove the ice-build capability. Once this has been achieved, it is a matter of fact that the ice will reflect solar radiation reducing the rate at which the ice created would melt.

The business is targeting sales of trial units within 12 months of beginning development. This is anticipated to be against firm requirements previously gathered with Governments and large companies.

Machine components have been concept tested with a 3D printed version of the prototype 10 watt machine that will be used on the initial stage of in-the-field testing (Image below).

Real Ice will be established as a technology provider with a clean strategy for packaging the machine or delivering the machine and the service. Such a detailed approach will be essential in order to understand the detail in any risk and the path to mitigating it.

Real Ice sells the machines and can act as a trader between customers interested in the product of these machines (ice, habitat created, etc.) and potential owners of these machines in-situ (contracting & management). Real Ice can also provide machines and training for teams of the organisations who will want to create ice in areas where no one in-situ operates a machine already.

One of the key values in this project begins with the engineering brainpower that’s gone into it already; this is not the works of a daydreamer; the machines in use today work, and they can deliver exactly the opportunities we described above. Various matrices are used to assess and to understand a business capability against their potential to deliver today as well as tomorrow. Our experience covers advanced technologies in multiple markets, deep security, world-leading rail and highways technologies. Combined with the financial and operations experience in our management team, we believe that Real Ice is an exciting vehicle for delivering major change with revolutionary approaches to life-changing global environmental issues today.

To begin our business journey, we are currently seeking investment to allow completion of a prototype ice machine that can be concept-tested on the ice during the winter season in the High Arctic.

Cian Sherwin
Cian Sherwin
Mr
A Masters by Research in Consultancy for Higher Education catapulted me into the world of innovation by design, a working relationship with a professional consultant and the Real Ice team. I am passionate about the protection of all things living.
LinkedIn profile
Contact Cian