The farm is just about 180 square feet but produces 200 heads of lettuce and consists of a series of wall pipes, a coy aquarium and rows of custom-made full spectrum China-made, LED grow lights. The single room is air-conditioned and has an air purifier and to the extreme right of the room, on the far end from the entrance, there is a tall blue barrel where the water from the aquarium is purified as well (he has never had to change or replace water since first putting water in May, 2020); the purified water is fed to the plants which are seen at different stages of growth, protruding from the holes in the PVC pipes. The main product of the farm at present is Ronnie’s own variety of lettuce, which Ronnie describes as a “douglar” a Trinidadian term for a mix because it is a cross between the US buttercrunch and a more popular local variety. For lettuces, the main product of the farm, the cycle from seed to harvest is 35 days and is estimated to have at least 18 crop cycles. Ronnie believes he can replicate that cycle for strawberries, compared to conventionally grown California strawberries where the seed-to harvest period lasts 49 to 62-days and where there are just 3 crop cycles per year.

According to Ronnie, the secret to the farm is the exact mix of fertilizer, which comprises treated fish faeces, sea minerals and recycled water and the carefully calibrated lighting. Each plant, he explains, requires special lighting for it to absorb the right amount of minerals and for it to grow a particular way. Prior to acquiring custom-made Chinese lights, the lettuce was limp, the way they are preferred in China. Experimenting with other lights, the lettuce was too firm and tough. Ronnie also has mature lettuce plants where he can get his seeds for new germination. Through Ronnie’s own research, he specified the kind of lighting he wants for his own lettuce, suitable for the Trinidad and Tobago customer. In one section of the farm, Ronnie is growing strawberries (there are a few young ones on the shrub), dwarf apple trees and kiwis.

The People Behind the "Farm"

Ronnie Yearwood and his wife are Trinidadian Christian missionaries based in Guinea Bissau for 28 years. They started growing pigeon peas to make Trinidadian “pelau”, a signature dish from Trinidad. In Guinea Bissau’s fertile soils the crop flourished, to the extent that what should have been a pigeon peas shrub quickly became a pigeon peas tree.  Having access to 10 acres of land in Cumuto, Trinidad, Ronnie decided to use two acres for pimento pepper cultivation, hoping to replicate his Guinea Bissau experience. But Ronnie soon discovered that the Caribbean is not Africa. The work was arduous and labor-intensive, the temperatures were often too high making irrigation pipes a necessity, soils were plagued with root-eating nematodes, and insects proved too many to beat. Yields were small both in terms of the amount given and the size of the produce. To make matters worse, Ronnie took a loan from the Agricultural Development Bank for the project. While the authorities and agriculture shops recommended pesticides, Ronnie, a chemist by training, preferred to avoid the use of commercial pesticides, apart from the standard combinations of nitrogen, potassium, phosphorus (NPK) formulae. Having seen the ease of cultivation in Guinea Bissau, and the success of large-scale controlled agriculture in California, USA, Ronnie decided to study how to produce crops in a clean, pest- and pesticide-free environment, with low water and energy reliance but on a small scale. Today that project has become Beyond Organic – a small commercial farm operating out of the annex of Ronnie and Beverley’s Trinidad and Tobago home in East Trinidad. Ronnie Yearwood and Beverley, his wife, still live in Guinea Bissau but they travel home for a few months from time to time. One such visit, in October, 2019, unexpectedly extended for personal reasons and then on account of the COVID-19 pandemic, has become a year-long stay and the start of Beyond Organic, operational since May 2020.

The entire cost of the annex, inclusive of construction, temperature regulation, and irrigation, was TT$60,000. The most notable recurrent costs, according to Ronnie, is the cotton-wool cosmetic pads that he uses for germinating the seeds, costing TT$10.00 for 100 pads. Ronnie looks back and compares the new farm with the cost of the failed 2-acre project two years ago, where he would have had a loan of TT$200,000, plus extensive manual labor. If he hadn’t used inherited family land, it would have been even more expensive.

The Beyond Organic model has the potential to produce clean agriculture at a fraction of the cost of conventional agriculture. But Ronnie sees ways to further reduce the cost of his operation. For instance, since he is stuck here in Trinidad and Tobago, he’s plugged into the electric grid. However, he had originally wanted to use solar power. In Trinidad and Tobago, a net producer of fossil-fuel energy, commercial rates are too low to make solar generation practical. For poorer countries where energy is more expensive, he envisages solar-powered fans and cooling systems. Asking him about something like a staple carbohydrate, like the hardy dry-land rice currently branded Moruga Hill rice, in Trinidad and Tobago. After all, starving people don’t want lettuce and strawberries. “This method can be used to grow anything. You just have to do the research and experiment,” he explains. Some crops just need more space, he further elucidated, indicating that apples will need to be about 6-7 feet apart.

Ronnie wants to experiment with a wider range of crops, especially those that address the cultural needs of people in West Africa. His particular dream is to continue working on the project in West Africa, which is where his heart is. He explains that this model “is not for use everywhere in Africa, or everywhere in West Africa. In some parts of West Africa, there are drought conditions from October to July. If they can capture just a little bit of that water and use it effectively, they can have food all year.” One tilapia can spawn more than 10,000 fingerlings, meaning that there is a lot of fertilizer for the crops. He wants missionaries like himself to learn the model and use it to grow what the people want and need. Nevertheless, while Ronnie eyes his adopted home, Guinea Bissau, he sees the usefulness of his model for small-island countries like his native Trinidad and Tobago, where there is a high food import bill. His model, he asserts, can reduce the high food import bill of many small-island developing countries.

Another area of focus that concerns Ronnie is “light-engineered plants”. Since light affects the plants’ uptake of nutrients, Ronnie envisages the engineering of crops using diffident intensities of light during their growth phase, to adjust the level of particular vitamins and minerals that they contain. For example, low-potassium lettuce would be suitable for consumption by dialysis patients. Confident that he already knows how to do it, Ronnie is currently looking for a laboratory where he can get the biological components of his produce tested.

Ronnie is already selling his produce from his home. However, he wants to scale up, train others and experiment. 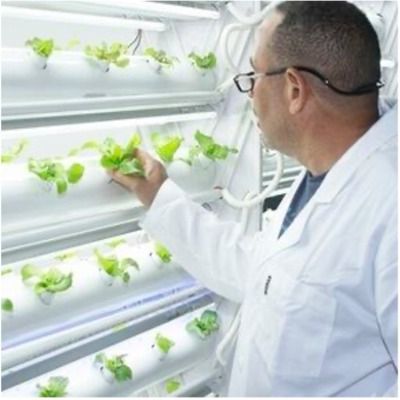